ABC Signs (or simply just ABC's) is a Signing Time! episode from season one. It aired on PBS Kids in the United States on December 14, 2004. It was the fifth episode of the first season aired in the United States. It was removed and replaced with the new episode My Favorite Things.

Note: This is based on the album's track list.

Rachel signs the letters A, B, C, D, E, F, and G in American Sign Language.

Rachel signs the letters H, I, J, and K in American Sign Language. 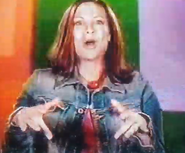